March 3rd, 2021
Nudes, weddings and a funeral – notes from the Planet Zoom 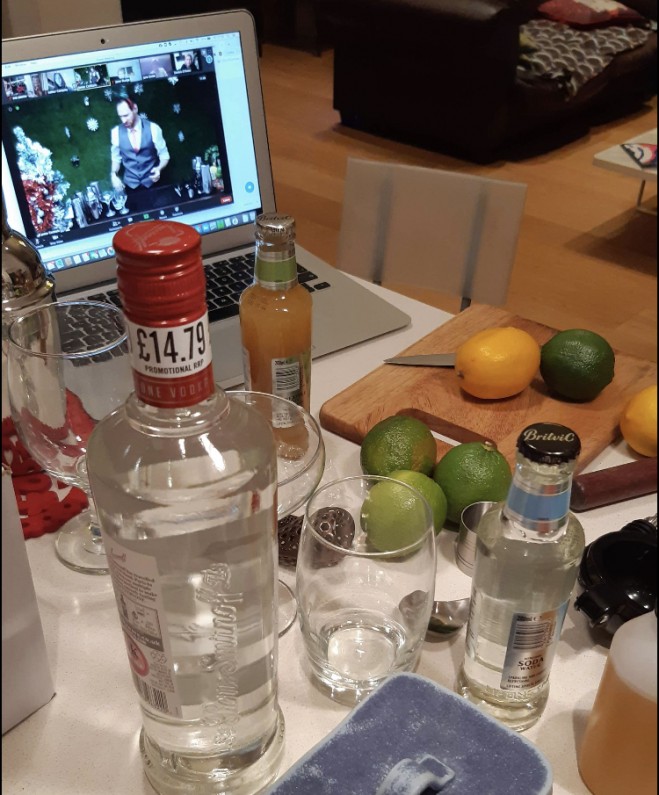 A full year has passed since I joined the tribe on Planet Zoom, as I created my account exactly on 7th March 2020. The Sun having made a full journey over Zoom’s horizon merits a brief reflection on how did we do in life, at work, with our families and wider society using videoconferencing to replace face to face meetings. Has Zoom helped or hindered our attempts to get thru Covid ? What have we learned during this time, about ourselves, our businesses and our humanity after a long “Year On Zoom”.

Zoom Onboarding – doorway to heaven or gates to hell?

The lockdown didn’t start in the UK till 16th March, but in my day-job I am an e-com /IT director for a fashion brand so had to prepare fast and get everyone in the team ready for the new era of Work From Home.

I was up and running on  the 7th in prep for ‘potential’ lockdown, so started rolling Zoom out across the business. First step was to get laptops for the “desktop people”  as I expected shortages with the whole UK moving to home working.

We placed the orders on the 7th and had all the kit back by 14th – incredibly lucky as a few days later, you couldn’t get a laptop for love or money, with world-wide shortage lasting well till end of May. HSBC and Amex and many other large companies got stuck with employees having to cart their huge desktops home or companies paying thru the nose for couriers to deliver PCs to people, often a long way away.

After getting everyone laptops, we then realised that for efficient work, quite a few departments like Finance, Design and Customer Service actually need desktops, not least due to the ergonomics of keyboards and screen sizes. It was a bit of a scramble and adjustment to what hardware is best for which department, but by the end of March we were ready.

I was not pleased to discover that our new shiny MacBook Air laptops were not actually equipped with decent cameras but some cave-man widget from about 2015, making everyone look like Bugsy Malone before the heist, dark and sneaky

We couldn’t replace the Macs so we just bought everyone really nice table lamps to improve lighting especially on the face, a hack that is a lot cheaper than investing in a new LogiTech camera.

Our landing on Zoom was a somewhat chaotic affair, not being given any time to prepare and so trying to figure out the difference between meetings and Webinars. We ended up using Teamviewer.com for a few people to get their settings right. It turned out that if people had to use Google Meets for suppliers meetings or Microsoft Teams (arrgh), the camera often did not work on Zoom, a setting issue that took another few days to figure out.

Cybersecurity – is this Zoom planet safe or toxic?

Zoom Space Station was a piece of equipment without a manual, cybersec issues we had to experience first and fix afterwards rather than being able to anticipate and prepare.

Before Lockdown, Zoom was not widely used in highly secure work environments, so it came as no surprise that their cybersec settings were non-existent. Boris Johnson discovered it first-hand when his Meeting ID was broadcast to the open world, inviting unwanted visitors to join in on supposedly high-security meetings in a practice that has since been called Zoombombing.

Much worse was Zoom-bombing on an Open Rights Group meeting where the unsecured set up allowed a trespasser to share pornographic images during the meeting –  only closing the session down got rid of the trespassing visitor.

By May cybersecurity was fixed, with Zoom hurriedly rolling out a bunch of new fixes, and fighting their way back into law firms and the military that got spooked so badly.  Meanwhile you are still not allowed to use Zoom during court cases (either as a judge or a cat!) despite the fact the settings are now as secure as Google Meet or Microsoft Teams.

By the summer Zoom has taken over our lives as everyone started booking end-to-end sessions in the drive for efficiency. Most bosses realised you don’t actually need any breaks between Zooms and employees were on the back foot as keen to continue working from home. Workers were prepared to push harder, start earlier and stay longer –  be more available, work thru lunch to make sure they were seen as ‘good value for money’ and not summoned back to the office to face the nightmare of a commute.

Zoom-Life balance is something that in a service industry has swung the wrong way, with life being something that you squeeze in-between Zoom sessions.

Use of Zoom started ramping up beyond essential meetings back in March, to basically an all-day affair for any reason, regardless of whether it needed a face chat or not. Zoom reportedly had to scramble to build out the infrastructure to store all the saved sessions and grew about 100 times over since April, the month when all the big companies eventually got on board.

The question “is it a Zoom or an email “ has apparently sadly been answered in favour of Zoom for all, even the least important of meetings.

Eco upside was that the environment has been given a breather, with London and New York pollution dropping in June by a whacking 35%-45% – the builders/vans/lorries were still polluting but at least the school run and workers commute by car has been replaced by the buzzing of bees on all but empty M25.

Some Zoom users have slimmed down, using the time saved on commute time for a new fitness drive but equally many have added pounds, happy in their secure knowledge that on Zoom, your face has pride of place !  A somewhat disturbing finding was  that many women often treat Zoom as a mirror, putting their lipstick on or correcting mascara during the meeting. I am all for multi-tasking tho so no comments from me!

Disabled people have also benefitted, no longer having to negotiate lift-less underground stations and wheelchair unfriendly buses. There were pluses to this virtual life.

Nudes and cocktails anyone?

Overall, work on Zoom has been a life saver during Lockdown, but it has taken it’s toll and more companies are trying to break up the relentless tide of calls with some fun.

The session that was a top Zoom delight was the nude drawing sessions with atynudes.com  , something that brightened the day even at the end of a long work Zoomathon.

I am partial to cocktails, so Zoom cocktail making session with x , went down very well, getting slowly but happily sloshed over a number of better or worse executed drinks. The only victim was my keyboard that stunk of Kahlua for the next two weeks after the spills during overenthusiastic making.

It was also fun to sense and smell the ingredients during the making – sense of smell is usually switched off during Zoom sessions.  What was fun was making, then tasting the same cocktail together, in real time- not quite the same as going to Hoxton Hotel for a well deserved Friday night session, but making cocktails together is a great team bonding session.

Life must go on

Zoom was not just work and cocktails. Xmas was celebrated with all the props, but also new babies were born, with my friend able to share the first hours of her newborn baby’s arrival in this world on Zoom. Her dearest and nearest were delighted at the opportunity that would not be so easy in pre-Lockdown era.

The negative was that it was at peak Covid and her husband was not allowed to the hospital, but at least sharing with him created the chance for all of us to share those precious new life early hours.

Bar Mitzvah’s were held, birthdays celebrated, including the 60th Wedding Anniversary of my children’s ‘honorary grandparents Sonia and Harold” which was a total joy, only partly diminished by being virtual. Sharing is caring and I could still feel part of their celebration on such a special day.

We also had a Zoom funeral, with an elderly relative passing at the peak of Covid, with a gathering held on Zoom to pay respects as well as help each other, sharing the difficult experience.

On a personal note Zoom helped me to share my mother’s difficult months as her dementia progressed, partially taking away her ability to recognize me and my sister. It is a heart-breaking wrench not being able to be there and hug her and hold my sister in my arms,  but chatting to them every few days over Zoom was a comfort and I will be eternally grateful to the technology giving me that opportunity to share precious lucid moments.

In summary – it was a rollercoaster of a year,  with ups and downs, nudes, cocktails and funerals, but Planet Zoom turned out to be more habitable, much happier and  more family-friendly than we all expected back in March.

It is unimaginable how we would have coped without Zoom and survive this nightmare with our humanity still intact and our family and work ties stronger than before Lockdown.

Zoom, Ergo sum. I Zoom therefore I am. Wishing you all a happy Zoom anniversary!

Citizen of the Planet Zoom