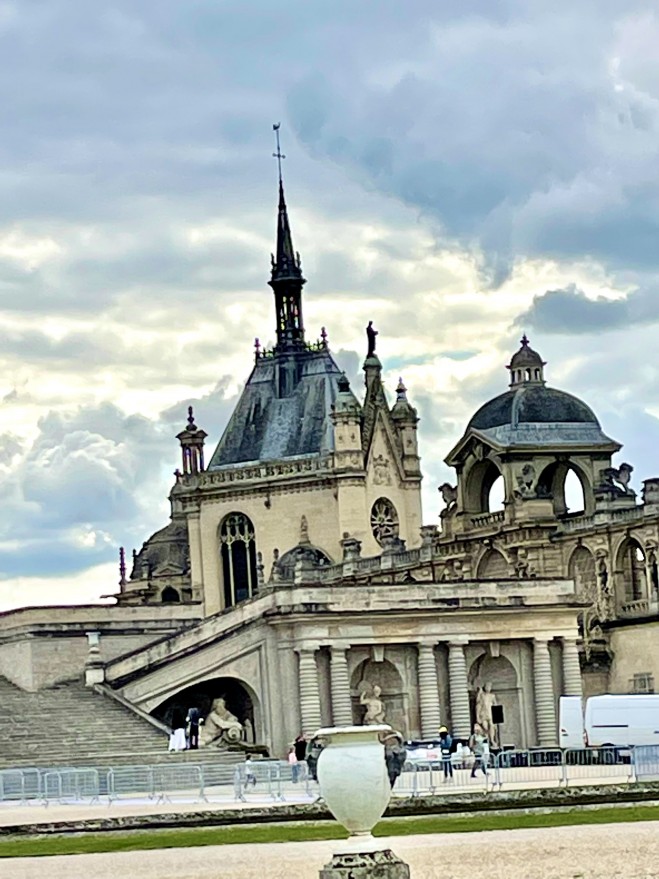 Much dis-info has been spouted by travel industry on how to make itself climate-friendly, nearly all of it challenged by the eco experts.  Promotions of eco lodges in Ecuador that are powered by hydropower but you can only reach by contributing 2 tonnes of carbon emissions during your long haul flight is a typical marketing ploy that makes eco travel an oxymoron. However, research shows that in theory, as long as you keep out of airports, travel by trains is generally considered eco-friendly and respectful of Mother Earth well-being.

The opportunity to test Eco-travel approach came my way in August, as my family was competing in a triathlon in Chantilly (northern France).  We based our journey plan on data available for various modes of transport and accommodation.

The objective was to combine the competition with investigation of how much data is available to make sensible decisions while planning the journey. We also wanted to check out local regeneration environmental projects as Chantilly Forest has a leading birds conservation program in France, is home to a unique group of birds, not least increasingly rare cranes and storks. As a bonus, it has rare lizards and a whole range of vipers (a bit of a surprise for us but something fairly common in French forests).

Chantilly is a part of Picardy, a main commute area for Paris and it is easily accessible by trains from Gard du Nord. As flying for tourist trips account for 60% of carbon emissions, the simple answer was to forget flying and stick to trains.

Researching our options to get to France, we noted that data points out to Eurostar – it emits 90% less carbon pollution than flight, so not perfect but way better than plane journey for the same distance.

Alas, all best plans fail when bureaucracy is involved. A new complication has emerged, as we needed to take our bikes for triathlon competition. However, Eurostar decided to ban bikes due to Covid (?). Part of the team had to pack the bikes onto our electric car and drive to Dover for the ferry crossing.

There are chargers all the way from Calais to Paris, so with fully electric car you are never out of reach.  PO Ferries are now running 40% reduction of carbon emissions by combining battery propulsion with fuel. They also have heat recovery system that saves fuel and reduces carbon emissions.

To add to that, Azimuth thrusters which aid manoeuvring for optimise energy consumption and things are beginning to look acceptable. Data shows ferries are not as eco-efficient as Eurostar, but much better than getting the bikes over to Paris by air.

Once in Paris, where we stopped for a visit to currently the most visited closed attraction in the world – cathedral Notre Dame. Traditional route would be to go by underground, but with France on “amber list” for Covid and growing infections, we looked at the local transport option and worked out that the healthiest and the most NetZero way is to zip around Paris on e-scooters. Unlike UK, France has approved electric scooters for use in urban environment, and it has proved to be a winner as a way of being a tourist but minimal carbon footprint.

In smaller towns as well as Paris the rent is simple, with the process of hire taking about 2 min. Hire locations are plentiful, hire is easy to do on the mobile via apps and you don’t need a helmet (although many people use the collapsible ones that they carry in their backpacks). London Mayor needs to  take note.

France uses 7.1 MWh energy per head, the highest usage in Europe, but only 20% is derived from renewable sources (mostly solar).   75% of its energy comes from nuclear power stations, significantly more than any other country in the world. This is to be changed by 2035, when nuclear should be reduced by 50% due to migration to renewables including wind (late in coming in France despite coastal winds).

It is a given that most hotels will be hooked to electricity incoming via nuclear grid, so unless you are planning camping, there is not obvious way to sleep sustainably.  However, French, hotels are now on ‘build back better’ roadmap post Covid and Net Zero travel drive, aiming to return to business with a whole array of eco-improvements.

The best option is to look for Eco-hotel Alliance, which is now promoting mandatory use of sensors to minimise use of aircon/heating in empty rooms and optimising fossil fuel utilisation. Hotel mattress recycling schemes and growing roof gardens on hotel buildings to reflect sunlight and minimise building temperature are also attracting followers.

Tip 5: daily re-wash of room towels accounts for surprising high percentage of water and energy used in hotels – a legacy habit from our care-free energy past.  Let the hotel know you don’t need to refresh them  daily and they will be happy to comply.

Most of Picardy restaurants are solidly supporting local suppliers, with ducks, chicken, veg sourced from the nearby farms, with of course wine makers from nearby Champagne area. In fact, 10% of Champagne wine production comes from Picardy, so you can quaff your bubbly guilt-free in Chantilly, as it would have only travelled a short distance from the vineyards.

Supporting restaurant menu with locally sourced ingredients minimises transport emissions, and with perishables, it maintains freshness without forcing food into long periods in chilled or frozen lorries (the main reason why tomatoes taste so bad in UK).

In Chantilly, there is plenty of local produce that even the best of chefs would not turn their noses on, with it’s famous Chantilly cream from local crème fraiche, cheeses and vegetables like leaks (leak pie is the local specialty). There is also locally produced digestif called Hipocras (a  variation on “hair of the dog” as we discovered after our post-triathlon party).

Picardy hotel chains are also contributing to their local conservation projects, from buying eggs of the local ducks or forest fruit use in menus, to sponsorship to staff hands-on involvement in Chantilly Forest, encouraging return of cranes, storks and rare breeds of ducks.

As climate change is causing drought and damage to the forest soil, a large-scale replanting project has been launched recently to increase the tree species that are more resilient to drier conditions – this project is the first of many that forestry guardians are introducing in many of the threatened wooded areas in Northern France.

The infrastructure for fully NetZero travel to France is clearly emerging, but notable lack of transparency on carbon emissions of hotels makes the decisions harder for the eco-tourists.

A standardised country-wide database of accommodation and food suppliers in  tourist industry and its carbon footprint would be needed to focus the minds of carbon-conscious travellers. Data may be the new oil, but in this case, if provided, it would show us a path away from fossil fuels.