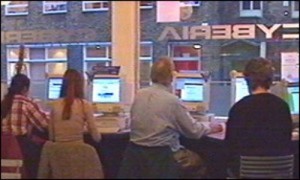 Once upon the time, the cyber cafe was the in place for surfing the web and sending emails to friends.

Very few people had access to the net and yet we were all fascinated by the idea of getting online.

It is just like there is a requirement for public phones – we will be providing the service because the demand will continue.
Phil Mullan
Cybercafe
Since then we have come a long way and become much more sophisticated in our use of the internet.

The news that in Edinburgh one of the Cyberia chain of cafes has closed – because the owners believe there is more money to be made in other ventures – is causing some people to ask if the internet cafe has a future now that we are all starting to get access from home or at work.

Not long ago – paying anything up to 5 an hour at an internet cafe was the only way many of us could get online. Very few of us had access to the internet – so places like Cyberia were very popular.

But with internet access so widely available now, paying for the privilege to go online just doesn’t seem worth it.
More and more of us can log on at home and many have free access in the workplace.

Although not everyone is benefiting from this just yet, it is still a complete change from how we were seven years ago when the first Cyberia cafe opened in London.

The company which started Cyberia believes the internet cafe has a bright future.

It says consumer demand is as high as ever.

“As people become more used to using the internet in different places there has also been a growing requirement for public internet access.

“It is just like there is a requirement for public phones – we will be providing the service because the demand will continue,” says Phil Mullan, Cybercafe chief executive.

But for those wanting their internet cafe business to thrive, adapting to our more sophisticated demands will be crucial.

Easyeverything, the internet store, is already focusing on that, looking to do more than just providing cheaper and fast access to the internet.

“We’re not offering purely internet access, there is now a facility where you can send video emails, where you can make a telephone call or actually use sophisticated Microsoft software for a presentation or a document,” explains spokesman James Rothine.

These new services, as well as normal internet access, will be the key to providing customers with what they really want in the future.