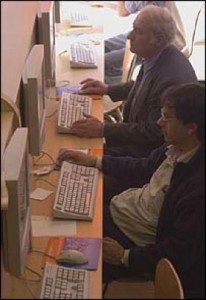 As the internet café celebrates its 10th birthday, what future does it face as net access at home becomes an everyday reality for more and more people?

Oh, the novelty of it all: surfing the net while sipping from a cup of frothy coffee.

It’s exactly 10 years since what is widely believed to be the UK’s first internet café, Cyberia, opened in a back street in London’s West End.

In September 1994, the Zeitgeist established its ghostly presence at this upstart enterprise, where internet access could be bought for £3-an-hour.
Are you reading this in an internet cafe? If so, tell us where and what it’s like. Send us a picture too.

As if to emphasise the sheer modernity of it all, customers could pass the time at one of the dozen or so computer terminals by imbibing a distinctly exotic coffee: a cappuccino.

And there was plenty of time to pass, with download speeds some 50-times slower than today’s broadband connection it could take several minutes to summon a web page.

Cyberia was nevertheless a hit, and spawned thousands of imitators. Ironically though, for founder Eva Pascoe, the first influx of customers were all men.
“For the first three days the queue outside was three-deep,” recalls Ms Pascoe, who was a Polish PhD student studying in London at the time. “The idea had been to create an environment that would draw women into using technology because at the time the internet was dominated by men.”

“We almost had a one-to-one staff-to-customer ratio, customers needed so much help.” Eva Pascoe on no-so-savvy net users

Men or women, the customers often needed nursing through the basics of internet usage, for which staff were on hand.

“So little was known about the net and searching was so difficult that we almost had a one-to-one staff-to-customer ratio, they needed so much help.”
Cyberia eventually folded, but its legacy lives on in the 20,000 internet cafes dotted around the globe, from market towns in Devon to Novosibirsk, the capital of, err, Siberia.

But as home access to the net has grown, the initial vision for cyber cafes has narrowed. 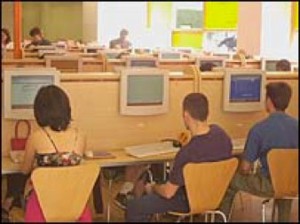 Once hyped as an emerging forum for community life, a sort of Lyon’s tea house for the 21st Century, many of today’s internet cafés are impersonal and functional.

Much of this is down to the fact that, in the UK at least, some 50% of homes now have internet access.


For many people there’s simply no need to pop down to the local internet café to fire off an e-mail or order a book from Amazon.

A more notable impact has been for backpackers and itinerant workers, who previously relied on an erratic combination of phone calls and post restante (where post offices keep mail for people who call for it).

A recent survey found more than two-thirds of British travellers regularly use e-mail while abroad, although many also resort to text messaging.

Eva Pascoe thinks the internet café formula probably has about another 10 years before it burns itself out.

Yet there is evidence that the idea is being reinvented. The Living Space in London’s Waterloo district is one example of an cyber café with a different vision.

Opened two years ago, the café is attempting to reach out to the surrounding community while also attracting travellers looking for an e-mail pit-stop.

The café offers free off-peak net access to over-50s, job seekers and young people, runs courses in information technology and homework clubs. Its profits are ploughed back into creating job opportunities for locals.

Manager John Houlihan calls it a “social enterprise” and emphasises the highly reasonable £1 for an hour rate for net access.

“About half our customers are travellers who are passing through the area, but it’s very important to us to use the idea of an internet café as a social base for locals to meet, talk and learn.”

And the future? Mr Houlihan plans a wireless net access signal to cover a neighbouring housing estate. The effect could be to turn a whole neighbourhood into one big cyber café. 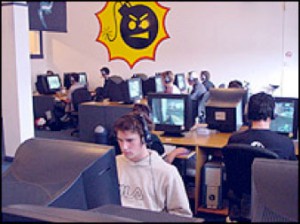 If you are reading this in an internet cafe, tell us where you are and what it’s like, using the form below. If you can, send us a picture too, to the address the.magazine@bbc.co.uk, making your subject line “Cyber cafe”.

I’m writing this from a LAN-gaming/internet cafe I own in New Zealand (right). I agree with Robert Sutton’s comment – the future is in LAN-gaming. In a small town we have over 230 members after 8 weeks being open – playing multiplayer computer games like Unreal, Call of Duty, and of course, Counterstrike. It is a surprisingly social activity – meeting new people and virtually shooting them. Brilliant! We don’t see the spread of home broadband as a problem – a lot of our members have broadband but come in here for the social contact and to demonstrate their skills to their immediate peers.
Dave Green, Wanganui, New Zealand

I remember Cyberia and Eva Pascoe well – I used it before the company I then worked for had its own net connection. I was passing the Cyberia site last Saturday and wondered what had happened to it. To my surprise it’s once again a cyber cafe – but now Korean-owned, and (appropriately for one of the world’s leading broadband countries) it has in its windows posters advertising online gaming. A new social role for cyber cafes, perhaps?
CJ, UK

In Scotland outside of the main cities internet cafes are virtually a thing of the past, due in part to greater home PC usage, but also thanks to free internet access through your local library.
William Robertson, UK

The future is LAN gaming centres, although very few have caught onto this yet.
Robert Sutton, Halifax, England

I am actually managing an internet cafe! Well, in 10 years time I will be at another job of course.
Sehlu, Zimbabwe

I’ve just got back from Australia and New Zealand, and was using internet cafes almost every day. It allowed me to check my emails, do my banking and write my travel-diary online for others to read. At around $4 and hour, I found them a great help to my travels and contacting home.
Andy Nock , Wales

I’m reading this in an internet cafe in Kkabarnet, Rift Valley province, Kenya. I can keep in touch reliably and cheaply as well as looking at the news and other stuff from home. Internet cafes use may well fold in the western world but for the majority in the world who cannot afford a computer they’re the business! Hassan and Robert
Andy bond, UK (in Kenya)

I went to the launch of Cyberia 10 years ago and interviewed Eva Pascoe for a women’s business magazine. I even took one of her internet awareness courses. However, I remember feeling the place was more amenable to men than women. Whether it was the atmosphere, the staff or the technology that was off-putting I can’t say. I mentioned we should join forces to promote the magazine and the cafe together to women, but nothing came of the idea. I’ve never been back to an internet cafe since then but have found my local library has excellent, free, friendly internet facilities and I don’t have to buy a £5 cappuccino.
Sally Jenkins, UK

Currently in Vietnam, the last year I have spent travelling would have probably been shortened to maybe 6 months had it not been for internet cafes and instant messenger. Just makes keeping in contact cheaper, and easier.
Natasha Lakovic, Vietnam (from the UK)
I’m currently reading this in the internet cafe in Virgin Megastore, Oxford (right). It’s certainly different from others I’ve been in, which just have a few computers in the corner of the room. It is all quite modern, with air conditioning, and spacious. Like the cafe in the article, it claims to have wireless access for my laptop, but I haven’t tried this. A big difference from 1994 I am sure! Have sent a phone picture of it to the email address given.
Ben Wheare, Oxford, UK

I work from home. Recently, an internet cafe, or technology lounge opened near me, providing free wireless access. The Glow Lounge in Clapham. I now work from there every day. It’s transformed the way I live and work! Coffee, friends and like-minded people all meet there on a regular basis.
Daniel Fresman, UK

Hi, I am writing this in an internet cafe called The Internet Window. The cafe here boasts around 40 computers and it’s open for 22 hours per day. It’s clean and tidy with friendly helpful staff but unfortunately doesn’t serve tea or coffee. Photos to follow later.
Graham Jefferies, Novosibirsk Siberia Russia