November 18th, 2017
How to shake up Women in Computing ratio – Eva’s top 5 influencers 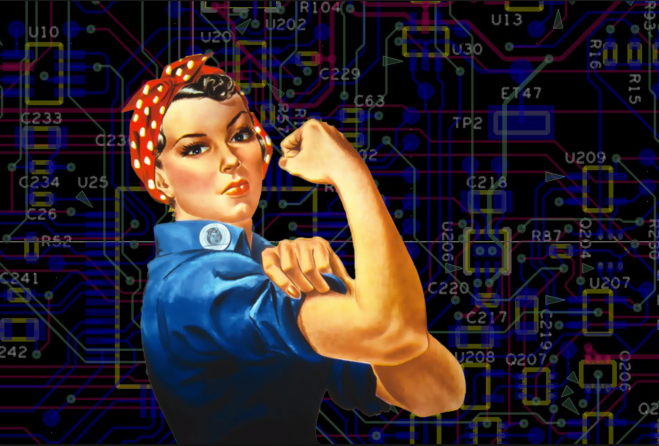 To celebrate International Womens’ Day, here is my top 5 badass women who changed the world to be a better, healthier and more equal place, here are Eva Pascoe’s (our own female digital pioneer) top 5:

Since then my enthusiasm for science was turned into a deep suspicion, not only of the fact that Communist system was incompatible with safe practicing of technology but also that combining humans and computer interfaces was a receipe for disaster (misinterpretation of the system state was one of the reasons why the tests in Chernobyl turned into the biggest world nuclear disaster). I left Poland shortly after, with a mission to study and improve computer interfaces.

Just as I was getting to grips with Cognition and Computing at Birkbeck College in London, Shoshanna Zuboff published early work her seminal book (1988) In the age of a Smart Machine, on how people learn to trust or distrust computers. It confirmed my suspicions that the story of computers and humans may not have a happy end. My PhD was a simulation of an accident in nuclear power station, examining how people react to different interfaces, but this was the last time I looked at this problem as it looked that nuclear power stations were coming out of use and funding has dried up for interface work in the field. Little did I know that a few years later Fukushima disaster would occur, where opaque interfaces to the controls of the complex system delayed the response to the tsunami-damaged nuclear plant and caused avoidable damage.

I still follow Shoshanna’s insightful writings on Google ethics and abuse of technology companies’ and their excessive surveillance powers , her stand provided a guiding framework to our Cyberalon.org work on Digital Bill of Rights

As Internet was growing more social, I discovered social cyberspace and my new passion for networks and collaborative work online. My forward-thinking boss at City University (Prof Peter Ayton) where I landed a Fellowship in Collaborative Decision Making , suggested a trip to New York where I discovered the amazing Stacy Horn and joined her virtual bulletin board Echo, East Cost Hangout Online. Unbelievably, as early as 1990, she persuaded New York Telephone to run a cable to her home in Greenwich Village, and in no time had thousands of New Yorkers meeting at her online bulletin board at midnight, using a text-only, command-line interface, creating a true door to artistic and alternative online social.

She was an arts grad, but taught herself how to set up networks working as telecoms analyst, one of the first women who crossed the arts-to-tech line and put foundations for future social media like Facebook and Twitter. Mr Zuckerberg was about 6 year old when Stacy rocked New York social media scene. Eat your heart out Mark!

Fran explained that IBM was running a successful program for fishing out young, mathematical and engineering female talent from Universities, supporting their computer science PhDs and allowing them to take maternity leave without ruining their career paths. Fran then went on to be the first woman to win Turing Prize (Nobel prize equivalent for Computing). She argued that Universities and large technical companies need to ‘get them young and support them’ strategy for female computer sciences and engineering grads as the tried-and-practiced career path pioneered by IBM was producing very good results.

Since then Sillicon Valley giant tech companies like Microsoft, Google, Oracle and Facebook have taken the exactly opposite view of women in computing – avoid them at all costs and fire at the earliest opportunity, while paying lip service to equality and talking about ‘LeaningIn’ but not actually doing anything about the ratio problem. Today the gender equality in computing remains more elusive than it has ever been as the number of women in computing has declined sharply since the 90’s.

Despite this gloomy trend, I continue to meet amazing women in technology field every day, women who were lucky like me to get into technology where it just looked like any other business and women were welcome – people like Sienne Veit, Online Product Director at John Lewis, Laura Wade-Gery who after heading M&S e-com team through the horrors of re-platforming, has just took a maternity leave at 50 and is bringing a balance to her life at last or Laura Jordan Bambach from Mr President, a leading London digital agency, who all started around 20 years ago. There is a big gap after, and it will only grow if nothing is being done.

Without a concerted joint effort of Universities and large technical companies, the gap between girls and boys will follow the current trends and become bigger and soon perhaps unbridgeable. As a society we are doing ourselves a massive disservice by not following IBMs best practice from the early computing phase – we know what to do, lets just do it!