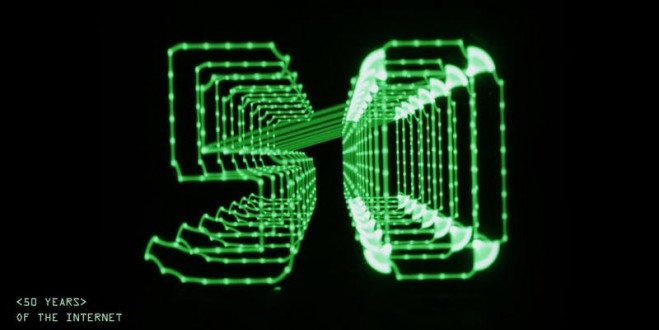 The internet’s turning 50. Come celebrate with Here East and Plexal.

From the event: Eva Pascoe’s talk starts at 1.11.50 – https://www.youtube.com/watch?v=Hkklt6lhEWQ&feature=youtu.be

The internet had taken its first breath.

Fifty years later, we’re revisiting the original principles of the internet while forecasting what its future will look like.

As the internet enters its next wave and spreads beyond devices into every corner of our lives, we’ll ask how those principles of collaboration, knowledge-sharing and trust can be preserved.

Opening with a never-been-seen-before interview with Leonard Kleinrock, we’ll also hear first-hand testimonies from some of the people who were there at the very beginning.

This is one birthday party you won’t want to miss…

6.10pm: Introduction from Jim Boulton, curator, Digital Archaeology, who will be sharing an exclusive teaser of his documentary featuring an interview with Leonard Kleinrock (who pioneered the mathematical theory of packet networks, the technology underpinning the internet).

6.20pm: Keynote from Alan Kay, the visionary who gave us the Xerox Alto (a pioneer of mobile computing) and the inspiration for Tron.

6.50pm: Peter Kirstein, UCL professor and “the father of the UK internet” who put the first computer on the internet outside of the US and gave Queen Elizabeth II her first email address.

7.30pm: From 5G to the Internet of Everything, what’s next for the internet? Saj Huq, programme director, LORCA

8pm: Networking drinks in Plexal Park and a screening of the full documentary in Centre Stage.