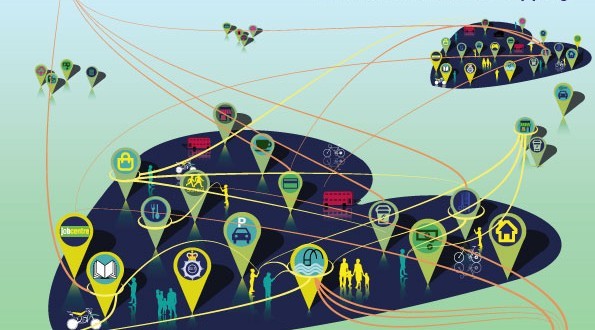 The UK high street is under assault from multiple threats, but the rise of online shopping is widely viewed as the biggest threat of all. While bricks and mortar sales have remained flat over the last five years, online sales have soared by 222 per cent – equal to an increase of £18.5bn.

And if high street retailers thought the worst tech tornado is behind them, they could not be more wrong. The pace of change is only going to get faster. The release of the 4G spectrum this August will allow online retail to offer such an immersive, exciting and user-friendly experience that today’s online shops will look positively medieval by comparison (Shopped, July 2013). In addition, the new, “same day delivery” option by Shutl (for Argos, Amazon and others) which rolled out in early 2013, is creating a lot of new Internet shoppers. Google will soon offer a similar service.

We see a chance to use the increasingly redundant stock of shops and warehouses into a #LessRetail mix on a new, Networked High Street where physical retail is just one of many sales and marketing channels. Local communities can flourish by adapting to technological advances : Libraries become hubs for E-lance working and  3d printing; and retailers network together to offer real-time, personalised deals to customers to buck the ‘showrooming’ trend of browsing in shops but buying online.

This Report is the technology contribution to the Future of Retail White Paper to be presented to the House of Commons in Sept 2013 as part of the Grimsey Review. It is intended as an aid for town planners and retailers in particular. It is building on the Portas’ Review of Dec 2011.

We would welcome feedback so please tweet or mail us.  In particular if you have any new technologies that are relevant.

Traditional retail is disappearing from the high street quicker than you can say ‘Moore’s Law’.

Since the 1870s the UK High St has been constantly reinventing itself due to changes in technology. The question is how can it best transform itself into a hybrid high street- where physical retail is just one of many sales and marketing channels.

Can the UK’s High Streets reinvent themselves along with the shift to e-commerce that has reached 10% in most sectors, with 15% in sportswear and 18% in fashion? (BRC, March 2013)
We outline our solution: The Networked High St : Each player is a node in our high street, but rather than operating independently, they should operate as a network. They should respond in real-time to their consumers and to the other nodes.

Part One of this report looks briefly at the changes in the UK since the High Street’s inception in 1870 as a result of the industrial revolution, to the introduction of department stores and supermarkets. Often these changes were met with skepticism at first, which soon turned to huge acceptance and usage. The 1960s saw an influx of fast changing fashion chain stores, followed by the ubiquitous car that meant out of town stores flourished. However the credit boom in the 2000’s meant the High St boomed once again.

Recently however the success of online shopping which resulted from technological innovations such as the World Wide Web in 1993, secure online payments, broadband and then WiFi from 2001, along with the smartphone and tablet. This meant people started to ‘showroom’ (browse in shops but actually purchase online) and purchase on the go, for instance during their daily commute. Daily Deals were another big pull that traditional retailers were not offering. In 2011, 32 million people or 66% of adults in the UK had made on line purchases (ONS) and on average over 11% of shops in UK high streets were vacant.

Part Two looks at what the near future is likely to hold as a result of the introduction of the 4G spectrum. Our research shows that online retail is likely to offer a truly immersive, exciting and user-friendly experience going forward. The same day delivery from players like Shutl and Google, the ease of eBay indie eshops and free and simple e-commerce systems from WordPress will heighten this process. The rise in social shopping currently being led by Pinterest and Facebook, together with online-only credit schemes from the likes of PayPal and Wonga will seal the deal.

In Part Three we outline our proposed methodology to attain a Networked High Street at a local stakeholders network level to ensure that the community features that a high street bring are not erased forever. We propose to assess each of the 433 major UK high streets with their own unique set of characteristics and create a Tool Box that contains a Digital Fit audit based on the Digital Maturity of its customers.

Our Recommendations Towards a Networked High St

• Interconnect all participants from retail/food and beverage/services/libraries/gyms/local government/police/health service/education using a Web portal, introducing real-time bookings to all. This varies from free slots at the 3D printers, to bidding for restaurant places and nail bar sessions.

• Create a portal with easy to use pull-out dashboards, configurable to individual points of view, with need-to-know info only.

• Develop StreetCred accounts which walkers and bikers would earn points for coming to visit car-less. This is networked to local retail/service providers/gyms/local governments to offer discounts in exchange for StreetCred points earned.

• Flexible use of vacant venues- each venue/landlord/agent to provide real-time bid-and-book I-USE (a web-based system, linked to a Networked High Street front page of the portal). This allows individuals, start-ups, independents and pop-ups to bid for unused stores. The use will be weighted preferentially and decided by local communities on the portal, i.e. food or retail depending on location, to deliver the best mix for each High Street.

• Libraries and leisure centers can host shared workspaces for freelancers as well as 3D printers and laser cutters that can be utilised for repairs, making and educational services.

The outcome of such as Dashboard is that a shared online calendar exists for goings-ons and deals for each town.

The Benefits of a Common Dasbhoard for Retailers/Service Providers include:

– Co-ordinated campaigns for maximum effect leading to increased knowledge of all other retailers’/service providers’ activity plan.
– The consumer is more informed as to what’s happening in his/her town.
– Create the Network of Networked High Streets – coordination of non-local campaigns run by retail/service providers to achieve maximum reach beyond immediate catchment area. All towns will eventually be integrated and run ‘adaptive marketing’.

In Part Four we outline five future scenarios that bring to life the recommendations above as well as detail the customised deals, e-freelancer work options, travel and transport data, customised ordering and social retail.

Finally we outline how the transformation of public facilities such as libraries and leisure centres will work.

This is a work in progress. We’d love to hear your comments/feedback!